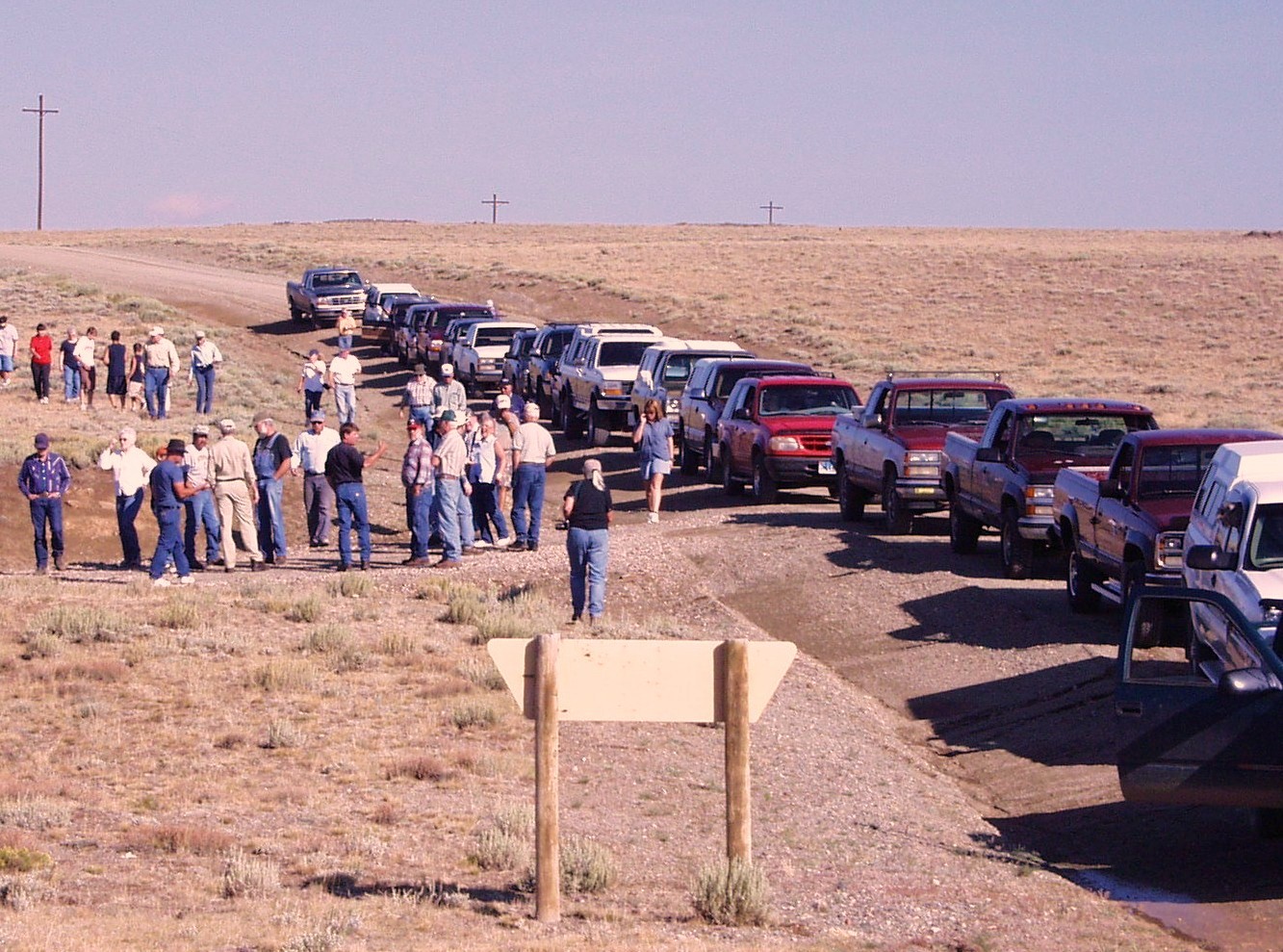 W. Dan Hausel, often took his own time on weekends to educate the public on geology, prospecting, rock hounding, hunting gold, diamonds and other gemstones while working for the Wyoming Geological Survey at the University of Wyoming. Over 3 decades, he presented more than 400 talks, clinics, short courses and very popular field trips and attracted hundreds of prospectors, rock hounds and even mining companies to the Wyoming Craton. Although the last geological survey director he worked for didn't think he knew how to communicate, Hausel was presented regional and national awards for communication, was inducted into two Halls-of-Fame for communication and geology, and published more than 1000 abstracts, books, maps, professional papers and magazine articles communicating to a number of people who visited Wyoming to find their personal treasure. While doing this work, he also mapped more than 650 square miles of complex geological terrain.

He started modern day gold rushes after finding significant amounts of gold in the Seminoe Mountains, the Rattlesnake Hills, South Pass and the Black Hills. Then he put Wyoming on the map after finding dozens of different types ot gemstones that were unknown to the region. When he left the Geological Survey in 2007, he was on the trail to discovering more gemstone and gold deposits.

Even so, he had already found a variety of gemstones in a region that was unknown for these precious stones, found some of the largest gemstones in the world, and identified a couple of world class gemstone deposits. In addition, his work led to the discovery of significant gold mineralization at the Carissa gold mine at South Pass, the Rattlesnake Hills greenstone belt, the Copper King and other localities. He also identified hundreds of cryptovolcanic structures that remain unexplored for diamonds and genesis. Then, a group of seven geologists (including Hausel) made a discovery of one of the largest gold deposits in North America - Donlin Creek, Alaska. This gold deposit is so big, that it contains more than twice the amount of gold mined in history of the Klondike and more than 120 times the amount of gold mined throughout the entire history of Wyoming. After making the discovery in 1987 and 1988, the group of geologists (which included 3 from Wyoming) were presented one of the most prestigeous awards in Economic Geology - the https://en.wikipedia.org/wiki/Prospectors_%26_Developers_Association_of_Canada" target="_blank">PDAC Thayer Lindsley Award for a major international mineral discovery.

Nicholas S. Law, Director General for the Awards Board for the International Biographical Center in Cambridge England wrote to Dan Hausel of Gilbert Arizona on June 26th, 2015:

“To achieve what you have, to scale the heights from which you inspire and lead by the standards you have attained are no ordinary accomplishments … As an existing Man of the Year the Awards Board of the IBC have decided to bestow on you, as respected and trusted friend of the IBC, the auspicious and beautiful Da Vinci Diamond.”

“Leonardo Da Vinci was chosen as the inspiration for the award due to his world renowned accomplishments in many different disciplines. I feel most reassured that by selecting you as the Da Vinci Laureate in recognition of your varied talents we are keeping to the register of his memory…”

“….Your avocation, enthusiasm and reputation are responsible for this magnificent recognition.”

This award is ironic in that you have are known as the GemHunter and Diamond Hunter and are responsible for finding several diamond deposits, geological mapping a group of diamond districts, and publishing many articles and books on diamond depoists. It is also notable that you have accumulated a bibliography of almost unachievable size - author of more than 1,000 publications; author, co-author and contributor to 100 books.

As a geoscientist, you inspired many people with your discoveries, i.e, one of the largest gold deposits in the world, some of the largest colored gemstone deposits ever to be found, mapped and found diamond deposits and as a public speaker, you presented lectures all over North America. You mapped more than 1,000 square kilometers of geological terrain and an artist of vision with dozens of detailed works. And your martial arts achievements are as impressive as your geological, writing, art and public speaking achievements. As a martial artist, you reached the highest rank in the world in Shorin-Ryu Karate (Seiyo-Kai), were certified as Sokeshodai (grandmaster), and was awarded Martial Arts Genius for your many accomplishments over five decades. Other national and international associations inducted you into 16 halls of fame for unmatched martial arts and teaching skills, geological knowledge, and more. Congratulatioins!

In response, Professor Hausel acknowledged his support over the years by Dr. Daniel Miller, Gary Glass, Dr. Don Blackstone (former State Geologists) and Dr. Robert Houston (former Geology Department Head). He also praised God and Christ for providing him with opportunities to express his thoughts and research. Much of his research was recently summarized in two books - one on Gold and the other on Gemstones.

Reply Rich Cordova
12:23 PM on September 20, 2015
Congratulation Dan! Well deserved you are a true inspiration to prospectors and geologists alike. Your work has inspired me as well as my son to look at the world differently by noticing the amazing geological formations that surrounds us. As a fourth grade student while my sons peers only recognize the mountains around us as rocks and dirt he sees it as the great master piece it is. Thanks again and keep up the good work!!!

Reply Emmanuel Deschamps
1:06 AM on January 10, 2021
Hi !! Dan
I have find gold, and diamonds bearing ore
I’m looking to find a professional in kimberlite structures ,and identify them.
As my self, I’m located in Canada regions north from Ottawa gatineau, municipalities ,Denholm QC
I study since kimberlite on the net , but still I’m far from expert as you are .
Is it possible to have a discussion directly on phone?
My web experience for kimberlite was interesting because, all kimberlite pictures on web is comparable to what I have in hand . And I have lots of it’s rare species.
I have been careful as really careful, to not excès what is really is , and did not register any of my finds as I’m scared to jump a few steps, I believe that the world is going crazy with covid19.
Please can you give me feedback on it ? Contact info [email protected]
Thanks Dan
Emmanuel